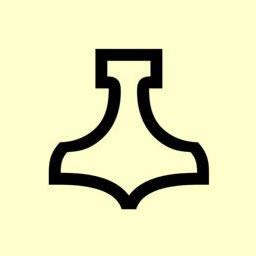 Really interesting read over at FastCo.’s Design blog » How Thor’s Hammer Made Its Way Onto Soldiers’ Headstones

In theory at least, Thor’s hammer was an acceptable symbol of faith in the eyes of the VA for the first time ever. But there was a dark side to the rules change. Like blót, the ancient Norse ritual sacrifice used to worship the gods, the Department of Veterans Affairs required blood to be spilled before Thor’s hammer could be officially added to the list. A soldier needed to die.

On May 10, 2013, the U.S. Department of Veterans Affairs quietly made an update to its official list of approved emblems, adding Thor’s hammer, Mjölnir. “There was no press release, no announcement, nothing,” Pitzl-Waters marvels. “They just dumped the symbol, and all of a sudden, there was Thor’s hammer.”

Implicit in the VA’s spontaneous recognition of Mjölnir was that someone had died, but who?