Disclaimer: This is not a review of Belle of the Ball. It’s a whole-hearted recommendation that you go buy it. It’s also a small look at how putting it on my table is affecting my children’s perspective.

Back in August of last year, I backed a game on Kickstarter called Belle of the Ball [BGG]. The designer, Daniel Solis, subtitles it — “A fancy, schmancy card game.” One of the benefits of becoming a backer was that you instantly had access to a print & play version of the game. I spent some time fiddling with the PDFs, fighting with the FedEx/Kinkos website, and took a trip to their store to pick up a playable version.

I roped my family into trying it with me. At the time, I was playing with my 7-year-old daughter, 9-year-old son, and wife. While unintentional, I think the fact that my version was printed in black & white allowed me to ‘pull one over’ on my son. He didn’t really notice the feminine ‘lean’ to the game’s theme.

In Belle of the Ball, players are hosting formal parties and attempting to invite ridiculously and brilliantly named guests to their parties and match them into groups with common interests represented by icons on the Guest cards. Belle cards let you manipulate your groups, opponents’ groups, or cause some act of mischief.

The theme is really engaging and production quality is fantastic. What I like best about the game is the mini-drafting gameplay mechanic for the Guest and Belle cards. You start the game with a few Guest cards turned face down. The card backs are envelopes that you use as currency called ‘Regrets’. Paying regrets to guests you pass in the line in order to invite the one you desire feels simple and refined; fits the theme perfectly. 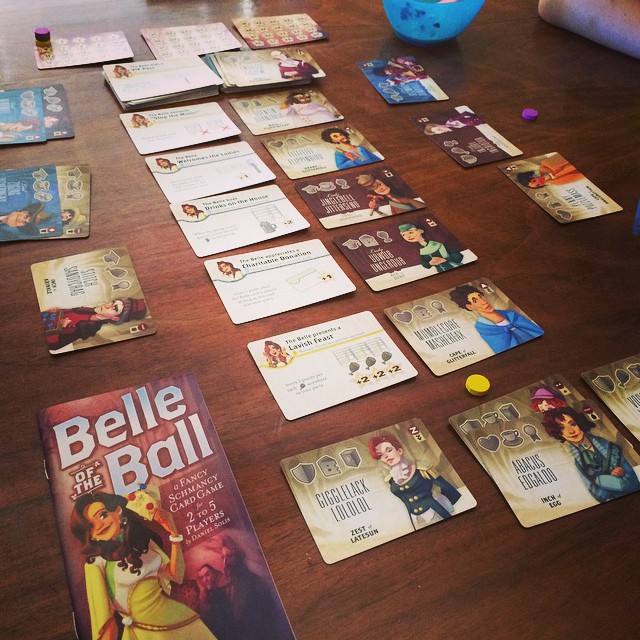 As I said earlier, I backed Belle of the Ball a little over a year ago. The physical version finally showed up about a week ago. The box is brightly colored and features a female character that looks like she stepped out of Disney’s Beauty and the Beast. My son—now 10—resisted playing at first.

“It just doesn’t look fun, Dad. It looks like a game for girls.”

My daughter and I goaded him into playing with us. Amusingly, he didn’t recognize it until we’d each taken a few turns and the Guest drafting mechanic finally jogged his memory. He visibly let his guard down and allowed himself to have fun with it. He started announcing the guests’ names aloud as he invited them into his groups and really got into finding the perfect Belle cards for his hand. Perhaps most amazingly, despite the fact that my daughter won, he admitted he really liked the game and would play again!1

It was a perfect example for both of my kids to see that they can easily deprive themselves of a really enjoyable experience by avoiding something because of how it looks.

Thank you, Mr. Solis, for a great experience on the table!