Yesterday we learned that my daughter has had a fractured bone in her foot for the last two months.

Back in early March, my daughter fell off the climbing dome in our backyard and hurt her foot. «Merry Christmas, kids.» Of course, in the days that followed, we watched her limp a bit and complain of soreness, but there was nothing alarming about any of it. Within a couple days, she seemed to be back at full speed.

Sometime last week, I noticed her limping and asked her about it a couple times. Each time I asked her about it, she’d dismiss any concern and denied that anything hurt. Over the weekend, the kids spent some time with Grammie and Papa; they thought her left foot looked a little swollen and pointed it out to me when I picked up the kids. Again, when asked, she fended off any concern. I watched her a little closer on Sunday and despite her ability to run and jump in the backyard w/ her brother, I still saw a noticeable limp. Martha and I thought maybe her shoes were the problem, so we switched them out for slightly larger ones and thought that would be the end of it.

Dropping her off at school on Monday revealed that disturbing limp was still there.

An afternoon of waiting rooms, doctors, and an X-ray machine revealed all. 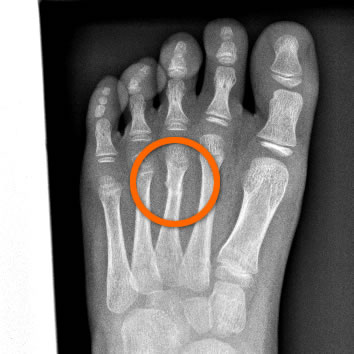